Kumbh Mela or Events very big events or Mela in India, and around the world, almost 100 million peoples come and visited this Events or Mela.It is held after 12 year. Kumbh is symbol of hindu faith. The name Kumbh Mela comes from Hindi, and in the original Sanskrit and other Indian languages it is more often known as Kumbha Mela. Kumbha means a pitcher and Mela means fair in Sanskrit. In this events Hindus gather to bathe in a sacred river. According to the scholars, it is believed that when Gods and demons were having fight over the nectar then Lord Vishnu flew away with the pot of nectar spilling drops of nectar at four different places; where we celebrate Kumbh melas, those places were Hardwar, Nasik, Ujjain and Prayag. Ardha ("Half")Kumbh Mela is held at only two places, Haridwar and Allahabad, every sixth year. 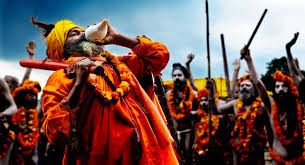 The celebration of Kumbh Mela depends on the position of Jupiter (Brhaspati) and the sun. When the Sun is in Aries (Mesh Rashi) and Jupiter in Aquarius, it is celebrated in Haridwar. When Jupiter is in Taurus (Vrishabha Rashi) and the Sun is in Capricorn (Makar Rashi), then kumbh is celebrated at Prayag. Mela is celebrated in Ujjain when Jupiter and the Sun are in Scorpio (Vrishchik Rashi). It is said that when the Jupiter and the sun falls on the zodiac sign, Leo; then Kumbh Mela is celebrated at Trimbakeshwar in Nasik. Kumbh Mela is celebrated with great pomp and show, crowd gets crazy and scenario of the fare is breath taking. Devotees congregate and perform several rites and rituals. Numbers of ceremonies are performed like religious discussions, devotional singing, mass feeding of holy men and women and poor, out of which bathing is considered as most sacred and takes place at the bank of river in every town, where Kumbh is celebrated.
The stars of the Kumbh Mela show are the sadhus, for whom the event is the single social event in a very unsociable existence. Solitary by nature, these holy men come in their thousands to Kumbh Mela, camping in groups representing their different akharas, or orders (Shiva, Rama etc). Other pilgrims seek out sadhus, looking for enlightenment and making offerings (and sometimes just smoking pot). You will be allowed to visit areas of some sadhu camps but not all, so ask around.
Most visitors come to Kumbh Mela to simply witness the mass of humanity, though non-Hindus, who were once barred from bathing, can take to the waters (you should still avoid the holiest of the bathing days). You can also pitch a tent in the vast tent city that arises on the river banks – up to 14 sq km of land is set aside for the tents of pilgrims and visitors.

Kumbha Mela has gained international fame as "the world's most massive act of faith." Pilgrims come to this holy event with such tremendous faith and in such overwhelming numbers that it boggles the mind. Faith is the most important thing for the pilgrims at Kumbha Mela, they have an "unflinching trust in something sublime".
In 2015, Kumbh Mela is celebrate at Trimbakeshwar in Nashik which is in Maharashtra. Trimbakeshwar is a holy town of Nasik as one of the twelve Jyotirlingas, Triyambakeshwar Jyotirlinga temple is situated there.
Next Kumbh Mela in Ujjain (Simhastha) 2016 will begin on 22nd of April and will continue till 21st of May.

Join Our Volunteer Tourism Program  & Get an Amazing Experience Of The Event !

Email ThisBlogThis!Share to TwitterShare to FacebookShare to Pinterest
Labels: #massive#holyriver#hindufaith#pilgrims#kumbhmela#india