'What are you doing for others'

If You Like To Do Something For Others ! Than Come Join HEEALS Volunteer Engagement Program ! 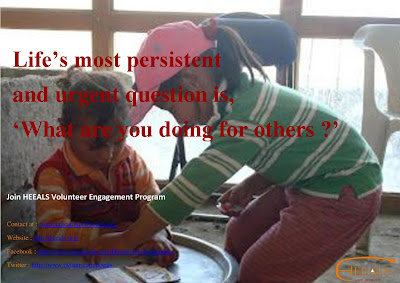 Email ThisBlogThis!Share to TwitterShare to FacebookShare to Pinterest
Labels: #communityservice#good#experience#volunteering#program#developingcountries#volunteering#heeals#india

Achieving the global goals: why volunteers are important 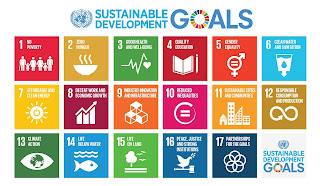 In the last 15 years, the Millennium Development Goals (MDGs) have framed global development efforts. Volunteer action for development has contributed to the MDGs in a wide variety of ways

The new agenda for sustainable development will frame global peace and development efforts in 2016-2030 in all countries, regardless of their development level. It has a wider scope and aims at tackling both vertical and cross-cutting issues. It also explicitly recognizes volunteer groups as stakeholders to achieve the new set of 17 Sustainable Development Goals (SDGs), also known as global goals.


Lessons learnt from the MDGs

MDGs implementation showed that sustainable development requires approaches that complement technical, financial and institutional measures. To achieve the SDGs, people’s engagement in planning, implementation and monitoring needs to be facilitated and new partnerships forged. Volunteers will be instrumental in this process.

This has strongly emerged from an extensive consultation process led by the United Nations (UN), which has involved over 8 million people, and was summarized as follows by the UN Secretary-General in his Synthesis Report on the post-2015 sustainable development agenda:“As we seek to build capacities and to help the new agenda to take root,

volunteerism can be another powerful and cross-cutting means of implementation.

Volunteerism can help to expand and mobilize constituencies, and to engage people in national planning and implementation for the Sustainable Development Goals. And volunteer groups can help to localize the new agenda by providing new spaces of interaction between governments and people for concrete and scalable actions.”

Volunteering can contribute to achieving the SDGs in many ways
Contact us at : communications@heeals.org

Integrating volunteering in the next decade

At the upcoming seventieth session of the UN General Assembly, the Secretary-General will report to Member States on progress on volunteerism since 2012 and present a proposed Plan of Action for the next decade and beyond (2016-2030).

The Plan of Action aims at integrating volunteering in peace and development policies and programmes through a strategic and collective long-term approach that matches the period of sustainable development goals (SDGs) implementation.
It provides a frame through which civil society, the UN and other stakeholders can support and leverage the potential of volunteerism worldwide. In fact, evidence exists that when volunteerism is integrated into national development strategies and United Nations plans, people are increasingly able to contribute to achievements in education, health, governance, sustainable livelihoods, security and peace, environment, gender and social inclusion.
Based on the improved recognition of volunteerism and on the continuing need to better acknowledge its essential contributions, the plan identifies three strategic objectives:
The Plan of Action is part of the Secretary General Report A/70/118 (see chapter IV) about progress made with regards to the recognition and promotion, facilitation, networking and integration of volunteerism worldwide since 2012.
Over the last three years there has been continued growth in public recognition of volunteerism as a common asset through research, international declarations, celebratory events and the promotion of volunteer opportunities for diverse and marginalized people, such as women and youth. National and global discussions on the post-2015 agenda have seen unprecedented levels of volunteer-supported community engagement. UNV also published thesecond State of the World’s Volunteerism Report on Transforming Governance in June 2015.

"Roshni - An End Of The Darkness" - Teaser

We release the teaser of "ROSHNI -An End Of The Darkness "