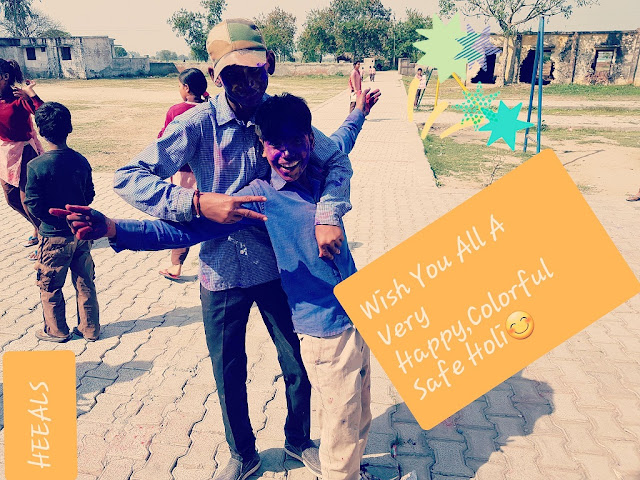 We Welcome Our New Intern

We welcome our New Intern From Italy.She is working on WASH & Children Health & Education Project 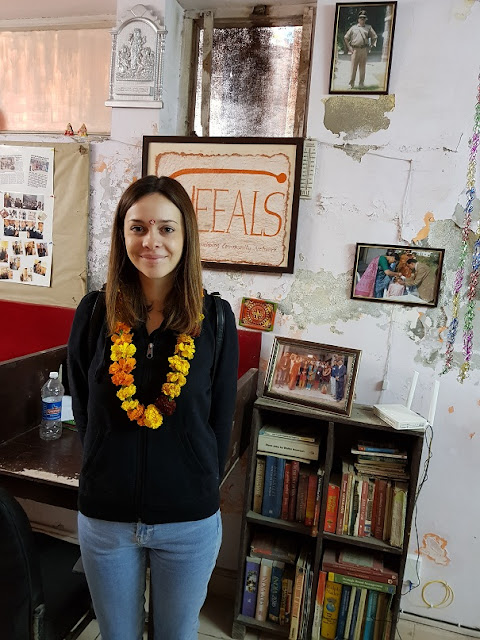 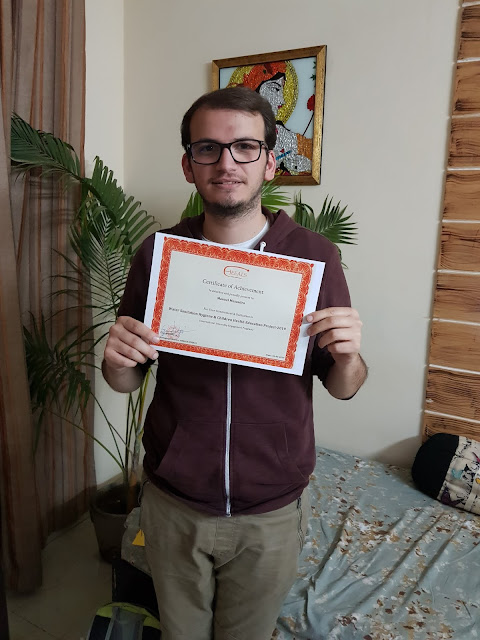 HEEALS Intern Bene successfully completed her internship and share her experience through her Testimonial Video.Interested Candidate Looking For Internship In NGO Sector Please Contact Us At: communications@heeals.org 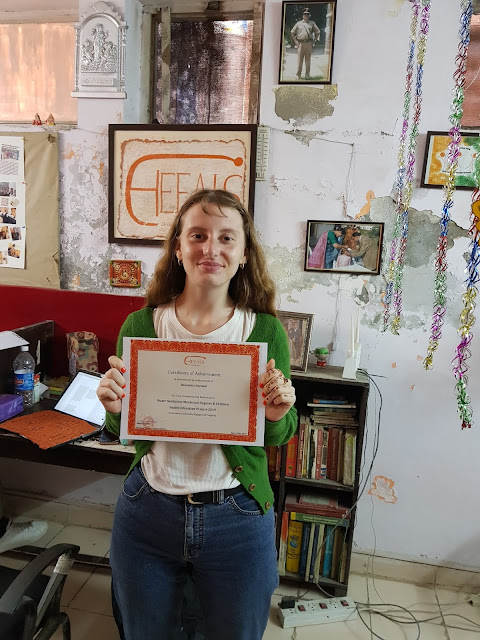 Manual scavenging refers to the practice of manually cleaning, carrying, disposing or handling in any

manner, human excreta from dry latrines and sewers. It is a caste-based occupation and the vast majority of workers involved are women. This practice was banned with the passing of the Employment of Manual Scavengers and Construction of Dry Latrines (Prohibition) Act 1993 and with the Prohibition of Employment As Manual Scavengers & their Rehabilitation Act 2013, but it continues to find practitioners. The occupation persists mainly because of the continued presence of insanitary latrines.There are about 2.6 million insanitary latrines (dry toilets) that require cleaning by hand.This dehumanizing practice is prevalent across many indian states, and it is done by people who fall lowest in the caste hierarchy. Not only is this practice humiliating but also a major cause of
discrimination.

Manual scavenging exists in many forms:
- Dry latrines, the oldest and most common form. Workers gather the waste manually, then carry it out of the house in baskets and dispose it outside the village. 98% of these workers are women.
Community Dry latrines (big structure used collectively by people) and Individual Dry Latrines (present at individual houses) are estimated to be 2,600,000 all over the country. According to the House Listing and Housing Census 2011, states such as Andhra Pradesh, Assam, Jammu and Kashmir, Maharashtra,Tamil Nadu, Uttar Pradesh and West Bengal account for more than 72% of the insanitary latrines in India.
- Railway track scavenging, the biggest violator of the law in India is the Indian Railways (the ministry continues to deny the practice of manual scavenging) where many train carriages have toilets dropping the excreta from trains on the tracks and who employ scavengers to clean the tracks manually. There are about 8,025 railway stations in the country which ferry about 23,000,000 passengers everyday and an estimated number of 36,176 railway cleaners.
- Cleaning of sewers and septic tanks, prevalent in urban areas. Workers gather the sewage with bare
hands, sometimes while neck deep in sewage. Many people die every year by inhaling poisonous gases.With an estimated number of 770,000 sewer cleaners the average of reported deaths is around 600 every year.Manual scavengers are at a double disadvantage. They are members of lower castes and as such, face enormous discrimination in society, and second, are disadvantaged because they are manual scavengers who clean human excreta. The challenge of rehabilitation is urgent, and requires a comprehensive approach that moves beyond expanding income generation or providing loans, to focus on various aspects crucial to secure the future of the next generation of liberated manual scavengers. Manual scavenging is not only a caste-based but also a gender-based occupation with 90% of them being women.

Households with dry latrines prefer women to clean the excreta instead of men as they are located inside the house.According to a Human Rights Watch report, on an average, women get paid as little as between Rs 10 and Rs 50 every month per household. It is much less than men who earn up to Rs 300 a day for cleaning sewer lines.There have been various efforts by the government, civil society organizations, and the foreign donor community to end manual scavenging. However there are significant barriers to achieving lasting change.Overcoming them requires a serious commitment from the government to ensure adequate programs are in place and to hold officials at all levels accountable for implementing laws and policies aimed at ending manual scavenging.

Legislative attempts to end manual scavenging have been accompanied by administrative programs,
referred to as schemes, and policies directed at converting India’s sanitation system and at helping
communities engaged in manual scavenging seek alternate livelihoods. The responsibility for
implementing these schemes and policies rests with a number of different government departments,
which often do not coordinate their efforts. The Government of India has adopted a two-pronged
strategy of eliminating insanitary latrines through demolition and conversion into sanitary latrines, and developing a comprehensive rehabilitation package for manual scavengers through a survey.

However,while manual scavenging for many may have ended as a form of employment, the stigma and discrimination associated with it lingers on, making it difficult for former or liberated manual scavengers to secure alternate livelihoods and raising the fear that people could once again return to manual scavenging in the absence of other opportunities to support their families.
In contrast to government failure, the success of civil society organizations in empowering individuals to leave manual scavenging confirms that, with directed effort, it is possible to end the practice. Without effective government programs, civil society and community based organizations are working to generate livelihoods for individuals who leave manual scavenging. For instance, they have piloted gender and market sensitive vocational training. According to Bezwada Wilson, founder of Safai Karmachari Andolan (a movement for elimination of manual scavenging), the Indian government has responded positively to these initiatives by engaging in serious dialogue with civil society organizations. These efforts offer strategies and good practices to translate India’s legislative commitments into effective action at the local level.Various United Nations agencies and international human rights bodies have also addressed manual scavenging:

UNICEF has approached manual scavenging as a water and sanitation issue; the World
Health Organization (WHO) has taken up manual scavenging as a health issue; UNDP has a special task force on the issue of Scheduled Castes and Scheduled Tribes; UN Women addresses manual scavenging based upon that fact that 95 percent of manual scavengers who clean dry toilets and open defecation are women; and the ILO focuses on ending manual scavenging by supporting implementation of relevant government policies in Uttar Pradesh, Bihar, Madhya Pradesh, Rajasthan, and Gujarat. On January 31, 2013, the UN High Commissioner on Human Rights, Navi Pillay, appealed to the Indian government to take action to end manual scavenging.
Government, civil society organizations, and the foreign donors intervention is needed to end caste based labor designations that bind women and men to manual scavenging. To overcome the entrenched obstacles discussed above, individuals need immediate access to alternate livelihoods and housing, and an effective response when they face threats of violence.

HEEALS (Health, Education, Environment And Livelihood Society) is one of those organizations
directly involved in facing manual scavenging problem. It is working on Water Sanitation and Toilet
Building projects in seven states: Delhi (National Capital Region), Haryana, Rajasthan, Himachal,
Uttranchal, Leh and Uttar Pradesh. HEEALS works in marginalized communities, slum schools, schools in unauthorised colonies, orphanages and refugee camps. Through spreading education on Water,Sanitation and Hygiene, organizing workshop against Manual Scavenging and building clean and safe toilets, HEEALS is working to increase the attendance rates of pupils in schools who leave their studies to work as manual scavengers, reduce the number of diseases and deaths and improve the health of people across Indian society.